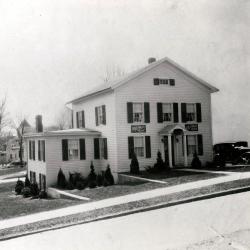 The Lillis Funeral Home has provided dignified and compassionate service since 1928. Mr. Joseph Lillis Sr. a lifetime New Milford resident, founded the establishment in the Golden Building on Railroad Street. In 1929  he relocated the  business to 30 Elm Street where  it remained for 33 years. In 1961, he purchased the former Barlow Mansion at the foot of the historic New Milford Green, and the Merwin house on South Main Street. In 1962, after extensive remodeling and refurbishing of the Barlow Mansion, and the razing of the Merwin house for parking, the Lillis Funeral Home was relocated to 58 Bridge Street, its present location.

The Lillis Funeral Home continues to be owned and operated by the Lillis Famly – Lawrence, John and Joanne, with Christopher M. Milano, director and manager.

The Lillis Funeral Home serves  not only the town of New Milford, but all of the area towns, including, but not limited to Bridgewater, Brookfield, Kent, New Fairfield, Roxbury, Sherman, Southbury, Washington, Warren and Woodbury. The funeral home is conveniently located to churches, cemeteries and crematories.